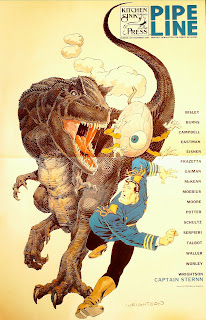 This was a promotional flyer available to retailers in bundles of 25 to be given out to customers.  This was for items expected to ship in December 1993.  Enjoy a great Berni Wrightson cover of his humorous sf series Captain Sternn.  Here's the actual cover to issue #2 as it shipped. 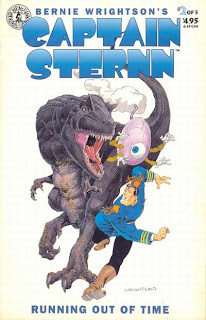 Compare the cover to the one solicited below.  At the time, Kitchen Sink was doing four series as well as many one shot comic books and related material. 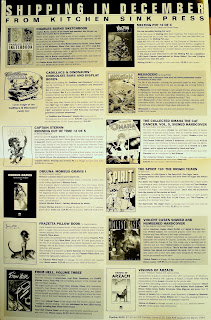 Since these all were supposed to ship in Dec. 1993, lets see what actually shipped on time.  Here are 7 of the titles listed and when these issues got to the retailer from Diamond.

Not bad, more than 50% came out in December.   Fans of Kitchen Sink books would not be overly disappointed by a week or two late.

Also of note is that Kitchen Sink "distributed" 3 of those titles.  From Hell was published by Mad Love Publishing, while Morbus Gravis and Visions of Arzach were published by Heavy Metal.   Sometimes a larger publisher would include another actual publisher's title under their solicitations to help them out, probably hoping for better orders or other reasons.  These were actually physically distributed to direct market retailers by the regular distributors like Diamond and Capital.

Newer Post Older Post Home
Subscribe to: Post Comments (Atom)
"And since the world don't matter,
Why answer when it calls,
Just laugh as you lay dying,
And you will out live them all."
- Steve Gerber, Man-Thing #12