Stan Lee predicted the Marvel SHIELD TV show back in 1965.

As every Marvel Comic's fan knows, Joss Whedon is writing a S.H.I.E.L.D. pilot for ABC TV set to start in the fall of 2013.  As I understand it, shooting has already started along with a Twitter account. 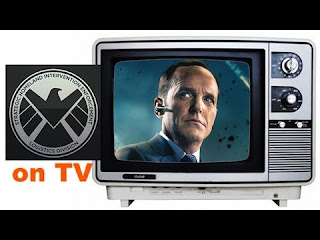 But, Stan Lee predicted the SHIELD TV show way back in 1965.

In Daredevil #11 (Dec 1965), written by Stan Lee and drawn by Bob Powell, The Organizer is trying to take over the whole city by getting control of the Reform Party political machine.  In doing so, he attempts to blow up the mayor by remote control from an already planted bomb.  But Daredevil (in disguise) is broadcasting the event live via regular TV channels when The Organizer flips the switch. The bomb fails to explode and it results in the following panel on page 10: 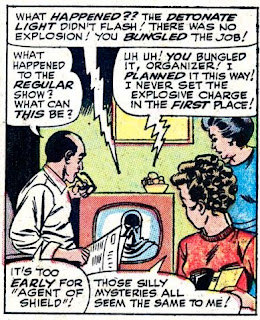 There is no other mention of the show, and of course DD defeats The Organizer.

Nick Fury, Agent of SHIELD, had just been introduced four months earlier in Strange Tales #135 (Aug 1965), so this was obviously a plug for the new series.  Nobody knew how big a success it would become.

Now I think Agent of SHIELD is a better title than just SHIELD, so I hope they use it for the TV show instead of just SHIELD.  Hopefully they will get a Stan Lee cameo too. 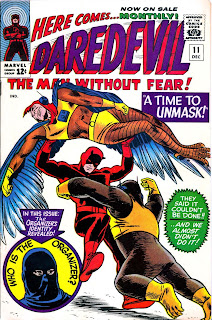 Email ThisBlogThis!Share to TwitterShare to FacebookShare to Pinterest
Newer Posts Older Posts Home
Subscribe to: Posts (Atom)
"And since the world don't matter,
Why answer when it calls,
Just laugh as you lay dying,
And you will out live them all."
- Steve Gerber, Man-Thing #12