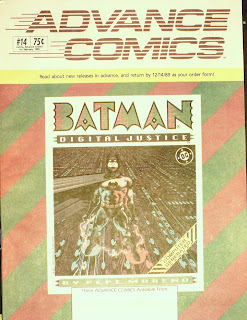 Customer orders to the retailer were due today in 1989 for Capital City stores.  As you can see by the cover, one of the highlights was the Batman: Digital Justice hardcover solicitation.  The entire book was created on a Mac computer.  Not the first comic book done entirely on the computer, as Shatter from First Comics came out in 1985. 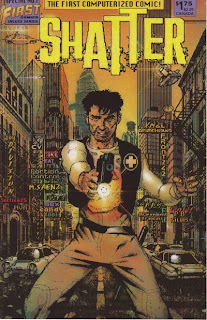 I like to compare the solicitations to what actually is published to see what changes there are during the time between solicitation and shipping.  Here it says that it will be 110 pages, while the GCD has it at 120 pages.  It also says there will be a trade paperback edition six months after the hardcover ships.  It don't think this ever came out.   Must not have sold as well as expected.  The cover has a few minor differences as the Registration and Trademarks are in different places and the back ground color of "Computer Generated" is white. 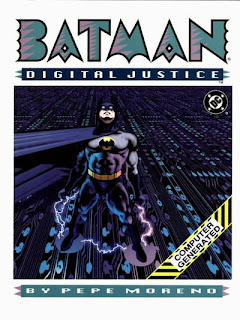 One of the best thing about Advance Comics is that it prints the top 100 comics shipping that month from Capital City.  There are no actual circulation numbers, but you can compare how titles are doing against each other. 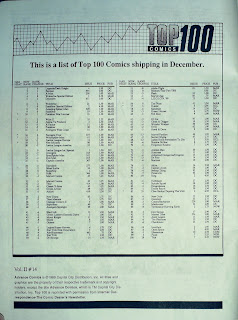 Here is a sample page of listings: 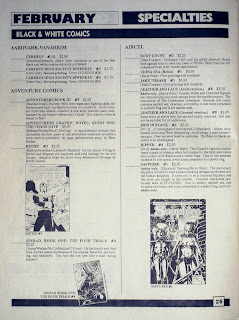 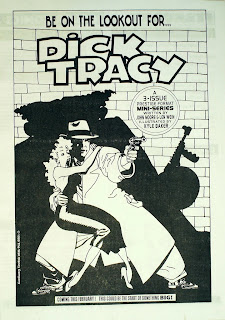 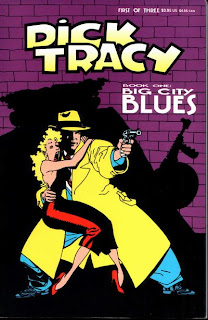 Here is an ad for the Disney Kyle Baker Dick Tracy mini-series, and the first issue cover.   Baker is much better in color though they should have made the background bricks a lighter color to bring out Flattop's shadow better.
Posted by Tim Stroup at 2:18 PM

Newer Post Older Post Home
Subscribe to: Post Comments (Atom)
"And since the world don't matter,
Why answer when it calls,
Just laugh as you lay dying,
And you will out live them all."
- Steve Gerber, Man-Thing #12